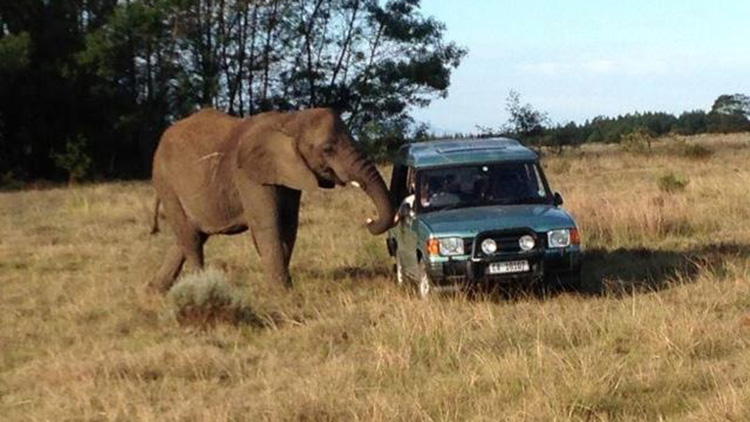 Thandora, a zoo elephant for more than 25 years, was released into a wild area after public pressure from visitors to South Africa who had witnessed her living alone in sub-standard conditions. Her story and message to the world is complex.

It is though our understanding that a “Thandora” is a drum used in pre-modern, Indian society to announce a message to the community. The drummer, or messenger, would walk down the street drumming a tune on the drum to announce a message. This process was referred to as ‘Thandora’, one that is fitting in our instance as we can use the story of Thandora to teach people key conservation principles that are being lost in this fast world of multi-levelled communication today.

The CG team had to manage their composure and professionalism at the outset of this project. This delicate female elephant, who was taken away from her mother at an early age during the culling era at Kruger National Park, had nothing other than love to offer her human visitors. This was surprising when considering the violence she was exposed to as an infant. Her parents were gunned down in her presence and, in all likelihood, she was roped to her mother before being collected together with other calves for sale.

Thandora’s history of companionship with other elephants reads as desperately as the start of her life. Her male companion died. Others brought to her for company did not bode well for her – one was abusive to her, pushing her into a mote at the perimeter of their enclosure. Thandora rejected both her babies simply because she was never taught how to be a mother through the complex social structures that exist within an elephant herd.

She crept into the hearts of every person on the team so that management had to consistently remind project participators that the objective was to wean her off her need to be with people so that she could develop relationships with other elephants. This task was near impossible as the only way the team could get Thandora out of her release Boma, and into the reserve, was through having a strong relationship with her.

We were her companion, teacher and comfort in the wild. We had to show her that we cared and show her the way to gain confidence in becoming an elephant again. The more experienced members of the team would make progress in increasing the distance she felt comfortable being away from us. Then a less experienced member of the team would succumb to her charm and persistence of being close by to humans. This practice made our progress delicate in that whilst it was understandable, we could not afford to give her mixed messages.

Spending time in the wild with Thandora, one realises that we are also just animals, albeit human animals. Being one with nature, the animals see you as part of them – their recognition of this is profound. It made us wonder why Thandora was resisting the freedom we were offering her? Why could she not see what we were seeing? She could just be… she did not need us, she could begin a new life – why did she need to be taught this new life?

The lesson was ours to learn. The message Thandora still carries for us occurs at many different levels. Whilst we humans say we recognise an elephant’s sentience, do we really understand the depth of this term and recognition of their cognitive abilities?

One glaring message she taught us was the value of family and friends; the role grandmothers and grandfathers play in our development during our formative years, how important the role of older siblings are in family, and how an older sister in the elephant world plays a vital role in caring for younger elephants weaned from their mothers, a role that gives the older sister or allo-mother purpose and meaning.